Today’s Book Marketing Tip: Position yourself as the writer who excels at the types of books other writers find difficult.

Writers face tough competition from each other, and the ranks of authors grows rapidly each day. There are about one thousand new books published every day! It is almost impossible to achieve visibility in such a large crowd.

Sadly, most all of these books are redundant. Many read exactly like some other book, and there is little new information being shared. Stories carry old plots, old concepts, and characters we have seen before.

However, once in a great while, someone breaks the mold. An author goes out on a limb. There is a runaway leader. Most importantly, they do better than I just did at avoiding all the old clichés.

These authors write something new, or new ways to write, or simply give a refreshingly delicious twist on a typical plot. They do what other writers have not dared to do.

Who would have expected a heptalogy of large tomes to succeed as children’s literature? (J.K. Rowling and the folks at Scholastic, that’s who.)

In Harry Potter, for example, J.K. Rowling took the chance on writing a heptalogy made of thick tomes. All the other writers of children’s literature believed that their readers needed shorter books, and episodic series. Rowling decided to write a much longer form. It was tough to write, and certainly tough to market, but once she willed it to happen, books flew off the shelves.

E.L. James tried her hand at kinky romance, and that resulted in a bestselling book that broke all records for book sales. 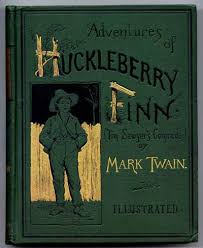 Mark Twain broke with many of the tenets of his day that dictated how writers should write novels.

Mark Twain wrote The Adventures of Huckleberry Finn in a conversational tone with dialect dialogue. This was unheard of in his day, when most all writers used a much more rigid style. This appealed to more of the working class, which at the time was finding it had more and more free time to read, and a methodically growing literacy rate. Twain made the reader his best friend, putting plot and character before style and literature. This made him perhaps the most famous novelist who ever lived.

Looking Glass by James R. Strickland is one of the titles from Flying Pen Press that goes where few authors dare to tread.

Flying Pen Press publishes Looking Glass by James R. Strickland. This is another unusual book that breaks from the crowd. We market this book as “cyberpunk” science fiction, but it clearly has no “punk” to it. Instead of a story about criminals jacking up the networks, this is about an IT security technician who has to find a serial killer within cyberspace—a killer that uses the Internet as a lethal weapon. Strickland tells his readers that he considers the book to be a “cyberthriller” rather than “cyberpunk.” But that’s not what makes it different.

What makes Looking Glass such an extraordinary book is that Strickland presents new human emotions derived from technology that is not yet currently available but which is fairly close to actual conception. Giving humans new emotions is generally avoided by most authors. Most authors focus on the human condition as it is currently perceived. However, we know that as technology changes society, it changes how we interact, and that changes the way we think and feel and react. It has always been thus. Strickland dives into this field of social science fiction with ease, or at least he makes it look easy. It is this examination of a part of humanity that has yet to be unleashed that makes Looking Glass such a profoundly strong novel.

Also, Strickland is not afraid to let his main character cuss up a storm, as that is her nature as a nearly paranoid schizophrenic, a trait indispensable to her cybersecurity profession. Many writers avoid such flow of profanity, especially the F bomb, but Strickland makes it work as clear narrative. The coarse language illuminates the new social diseases and human frailties Strickland lays bare. Such language may be considered obscene when other authors use it, but Strickland makes nasty words sing with depth and tone.

When authors go where authors are rarely willing to go, it gives them a type of genre to themselves. Such writers strive to break the rules, defy conventions, and delve deeper into storytelling. This is where it is hard for other authors to follow, and this is where truly great storytelling begins.

What conventions are you willing to challenge? What are most other writers avoiding that you can tackle? Find these, attempt these, and open a vein.

So, what conventions are you willing to challenge? What are you able to tackle that frightens other writers?